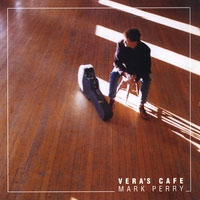 Mark released his third album, Vera’s Cafe, in 1996. The real Vera’s Cafe was a little restaurant at the foot of Main Street in Smithers, BC. It’s changed hands a few times and has brightened up since the days Mark wrote Produced by Spirit of the West member Hugh McMillan and co-produced by Mark, this 11-song recording has turned some ears with great songs and a straight forward approach to production.